Greetings- Have not posted for a while- I have still been making art but have also been dealing with some health issues.  My left knee is messed up- I think I hurt it doing lunges exercising. Had xrays and no tears we seen so did physical therapy for 3 week and it still hurts  once in a while...facing the fact that is more than likely is osteoarthritis. I am also looking at some surgery in early June- hernia repair.

I am working on a continuation of a series I started back in 2016- the last show I had in Minnesota before we moved had a series in it that I called messengers- I found some old like 1902  1904 convict photographs- these people were from North Shields England. They held a chalkboard with their crime written on it- shaming photographs- I was so taken with their expressions I just had to do something with them. I cut out the chalk board but left the frame- I made dioramas for the frames. So here is my progress so far. I altered the photographs and printed them out and glued them to 2 ply matboard. I cut them out- and then I made the boxes for the dioramas- The backgrounds for these will be monoprints. 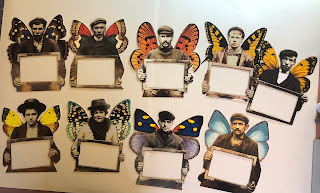 These will be in 9 inch shadow box frames. 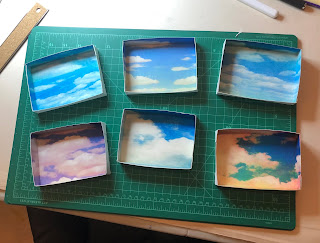 Boxes for the dioramas.