I have been spending a lot of time in my journal- finding that is the best way for me to get my emotions out of my head and onto a spread.  I can't seem to do  other art for right now at least.  I have posted these spreads in other art groups but those are closed groups so some of you may not have seen those.  I will include  what I wrote  about each spread. These spread were created from February 8th to the 18th. This first spread below was done on the 8th- the last was done yesterday the 18th.

I am in a group on Facebook, target resistance: first 100 days that is doing art to express ourselves using targets in the work some where. No Where To Run is the title- yes this is a political post do if you get offended please scroll by- Ted Cruiz has or plans to soon introduce legislation that will allow people to deny services to LGBT people and other groups including Muslims because it goes against their religion- so if my husband was hurt and went to ER and the attending doctor had an issue with gays he could refuse to treat him- so yes I feel like a target. 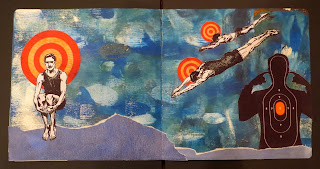 The next spread is Dive into the Fray. I am trying to do more active things not just signing petitions but actually calling my representatives and joining groups and giving money to organizations that are helping people. This was done for that Target group. 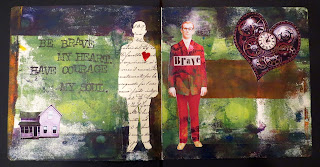 This spread is Be Brave.  This quote really says it all to me right now: Be strong enough to stand alone,
smart enough to know when you need help and
brave enough to ask for it. 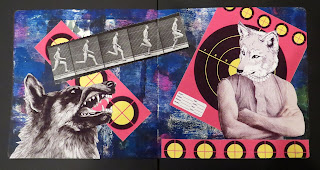 I spent the morning going through things on the tables in my workspace and got things sorted and picked up a bit and couldn't resist sitting down again. This is really an illustration to this small story. Sharmon Davidson Jennings shared the story on her blog. I am in a facebook group Target Resistance-The First 100 days. It's a group for doing art that deals with our reactions to what is going on in the country right now. The only rule is you have to use a Target somewhere in your work. Here is the story. 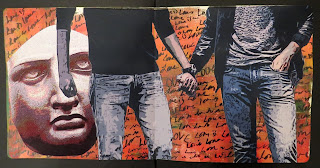 Well with all the hearings happening in several states about why people should be able to discriminate because serving a gay person or a Muslim or other religions because it is against their religion is demoralizing. And the anti-woman tone from several lawmakers is also so disturbing- where are we headed? I filled the background of this spread with Love is Love over and over and over- it was cathartic and I believe that Love is love. I included the face of the statue of liberty- I can only hope we continue to have the liberties that we do now.

This spread is dealing with something I think a lot about- in the past I am amazed at all the vintage photographs of men being affectionate with other men- perhaps some of these men were gay but in my research I found that it was common then for men to be openly affectionate with one another- friends- holding hands and hugging. Why did this change to the point now where men have been beaten for holding hands or kissing. This spread is my wistful look at the past. 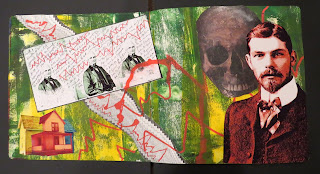 Well yesterday was a Wake Up call and that is the Title of this spread- cliche as it may sound. Our clinic recently had a screening for heart and vascular health- they sent me the results of my vascular scan yesterday but I didn't see the notice until yesterday morning. I am so glad we decided to go for those scans- they are able to tell now if you have a calcium build up in your pipes. Turns out I do and I will have to meet with a cardiologist soon- mine isn't super severe but is enough that I will have to deal with it. Some medical intervention will be needed. I already eat a very healthy diet and exercise at least 5 times a week sometimes 6. I do know part of this is hereditary. So yet another reminder that everyday really is a gift.

One Day At A Time

I will share a few journal spreads here.  I have been doing  a fair amount of journal work- it's sometimes the only way I have to release the anger- rage sorrow and  fear that I have about our country right now. The tone is so hateful in the states as well.  I just read in Iowa they have frozen the minimum wage and have made it illegal for cities to raise it.  Where is this coming from-  I am so upset and feel that the moral compass for this country is missing- it certainly is in the white house and congress.  Sharmon Davidson, a terrific artist I have met online had this on her blog today and I think it just might be the subject for a journal spread soon. http://sharmond.blogspot.com/.

This First spread is The Search for America's Missing Moral Compass. I am raging with the approval of a woman that bought her way to the Secretary of Education. She hates public educations knows nothing about it but because she contributed so much money to the evil bastards this is what we get- as a career educator is just enrages me- they have NO caring at all for the children and students of this country- everything has a price tag now. 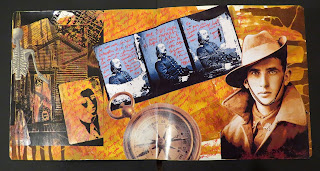 The next spread is Where is the Hero? I am hoping for us all to be heroes in doing all we can to make this government one that is for the people and not just billionaires and haters. 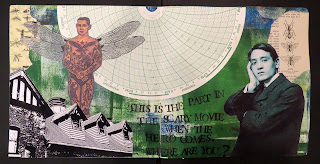 I love this quote-It was the  inspiration for this spread.  I am so very fortunate to have friends that have really had the keys to doors of mine that didn't even realize- I mostly have all open doors now. 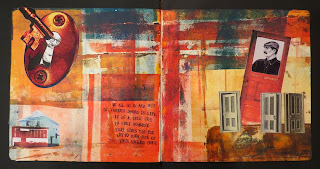