Hard to believe 2 years ago this week are arrived in Albuquerque New Mexico.  Lots has happened in 2 years- I have no regrets moving here from Minnesota.  There have been numerous health things to deal with so far things are ok...for both Ron and for me.  Then the pandemic came and well we are ll dealing with that.
My dear friend Orly Avineri has launched her first online class and I am loving it- I had the incredible experience of taking two classes from her when she taught them from her home in California- she has since moved to Salem , Oregon. The class is titled Come Outside. It is based on a deck of journaling cards she made. Each card has sparks of inspiration. The first spread I did for this class is below- it is based on the card Art and Life.
Albuquerque has been in the news- while there was damage to buildings downtown- it was not the scale of what happened in Minneapolis. What has happened was that there was a peaceful demonstration at a sculpture grouping in front of the Albuquerque art museum. The statue has been a source of pain for many here- it is of a  Spanish Conquistador portrayed as a hero. A group of armed militia showed up- one of the militia shot one of the protestors. The whole statue grouping has since been removed. This is the spread I did. Lots going on here. 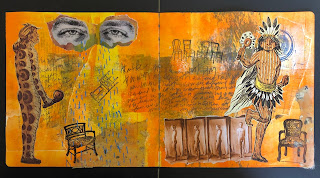